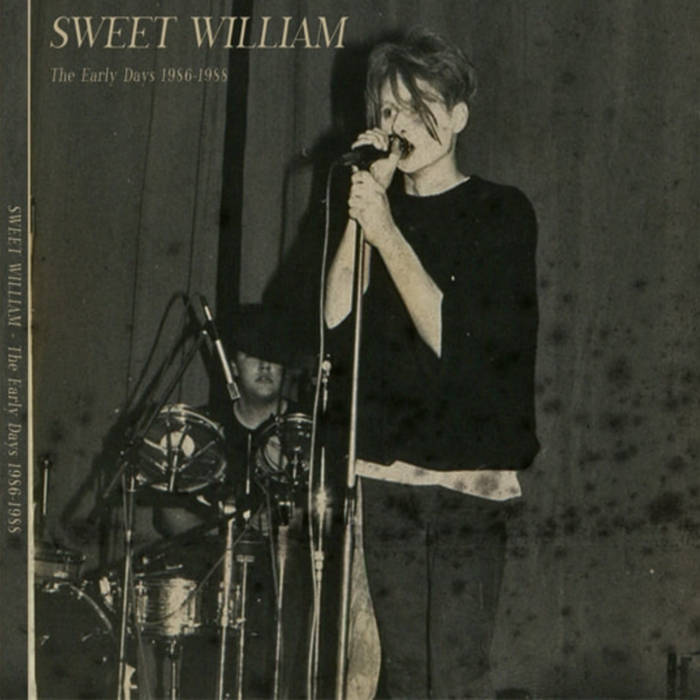 This album contains tracks from the very beginning of Sweet William. The band was found in October 1986. The first rehearsals were complete improvisations.
​Marius Nagel on drums was the only “educated” musician. The rest of the band, Oliver Heuer on vocals and “one string” guitar and Bodo Rosner on bass were autodidacts.
In 2016-17, about 30 years later Sweet Willian recorded these eleven songs for the first time in studio quality. Some of the tracks have been released earlier as live versions on tapes and cd’s.
​Recorded, mixed and mastered at Sonic Studio by Oliver Heuer and Marius Nagel between January 2016 & November 2017.
​Official release date: end of january 2018

Get your CD copy with all tracks here:
www.sweetwilliam.de

Background/Info: German formation Sweet William saw the daylight in 1986. Set up by Oliver Heuer and joined by Marius Nagel and Bodo Rosner the band started composing their first songs. While their now can look back at a serious discography, this work brings us back to the first hours of the band. Eleven songs have been selected and recorded for the very first time in studio quality.

Content: The album indeed sounds as the ‘early days’ of the band, getting us back in the dark magic of the 80s new-wave & cold-wave music. But Sweet William also added certain rock elements in their work. The guitar play brings the 80s nostalgia back alive while Oliver Heuer’s vocals have been performed with passion. The song “Coloured Feelings” will maybe appeal for some fans of The Mission.

I’m always a bit skeptical when a band moves back to the early days of their history, but I’ve to say that this album is a fascinating and fully entertaining piece of music. The rock-wave mix sounds great and passionate. It has been a real good idea to release this album. I don’t know how the original versions sounded, but this album has a typical 80s flavor carried with a real good production. No doubt Sweet William did a great job to improve the original sound quality of the songs. The artwork of this digipak also features several pictures from the band’s early days.
I’m not always a huge fan of bands releasing their ‘old’ and forgotten stuff, but I’ve to admit that there’re always a few exceptions to the rule and this album makes sense.

Conclusion: This album doesn’t bring anything new and yet it’s an opportunity to discover ‘old’ songs of this band for the very first time. This is a cool look back!


Title: The Early Days 1986-1988
Format: CD
Label: D-Monic Records(@)
Rated: *****
Sweet William are back with something new that's old, or something old that's new. These are songs from the band's earliest days (1986-1988) when they were more post punk than goth, and certainly sound like it too. Unfortunately there were no good studio recordings of the band's songs from this time so they did the next best thing- went into the studio (2016-17) and recorded them. No jazzed-up, modernized production here- Sweet William wanted to make these tracks sound like their late '80s album that never was, and to their credit, they succeeded. Maybe the band is more polished now than they were back then, after all, being together for so long will do that. Still, the songs speak for themselves, short (for the most part) simple and to the point. There are shades of Joy Division, Wire, The Birthday Party, The Chameleons, Killing Joke, Red Lorry Yellow Lorry, and perhaps most notably- Bauhaus. Although I'm sure Oliver Heuer and the band had other influences (such as Dylan on "An Impression of Life," and the Stooges elsewhere) but vocally if you took equal parts of Nick Cave, Peter Murphy and Ian Curtis, with a slight dash of post-Japan David Sylvian it might sound something like this. The eleven songs on this album are as good as anything those aforementioned bands were producing in their early days, perhaps with the exception of their most iconic song(s), but it took a decade of hard work and evolution for Sweet William to achieve a decent measure of success. While this album is more or less a time capsule, I believe it stands on its own as a remarkable achievement. If it was released in 1988 and I had heard it at the time, I definitely would have bought it, and likely played it a lot. There is plenty of atmosphere and attitude here, and you can tell where this band would eventually be heading. Interestingly, there is only one song sung in German ("Gelb Und Grun") and that's pretty short. Fine by me though, as it adds a bit of 'tude. It was certainly a worthwhile endeavor for Sweet William to reproduce these songs without bastardizing them as some groups might have been tempted to do. Recommended!